The King of Swing

Benny Goodman was born in Chicago in 1909 and was one of 12 children that escaped Poland with his parents. He started to play music and studying clarinet to escape the harsh conditions the family was in. Soon his clarinet plays could support his family after his father’s death. He is remembered for many top hits and as one of the most recognized jazz musicians on the planet.

Born Benjamin David Goodman in 1909 in Illinois, Benny was an incredibly talented clarinetist who had a major part in bringing in the swing style music. This earned him the title of “the King of Swing”.

Goodman started to play the clarinet at the age of 10 and soon his talents were further developed when he joined a band at the local social services building. His skills and engagement with many local bands earned him an American Federation of Musicians membership when he was only 14 years old.

When Benny was 16 years old he joined Ben Pollack and his band, moving to Los Angeles. He rose through the ranks of the band quickly and became one of the leading soloists.

At the age of 19 Benny released his first album called “A Jazz Holiday.” He left Ben Pollacks band the following year and moved to New York. 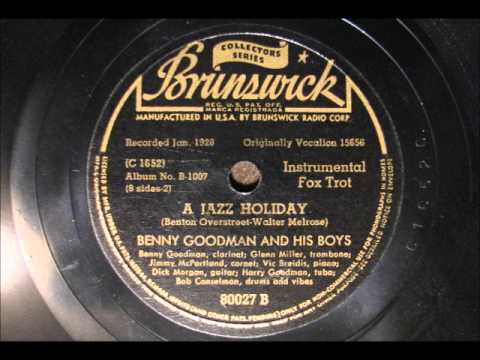 Moving to New York was a huge stepping stone for Benny and he soon managed to find work on the radio and in various Broadway show orchestras. Here Goodman had a chance to work with Fats Waller, Bessie Smith and Ted Lewis, all of them huge jazz legends. All this propelled him to the top of the charts with his “He’s Not Worth Your Tears” single.

Benny started his career as a bandleader in 1934, where he and his orchestra became a constant act on NBC radio show. Benny was not satisfied with the performance of his band on the “Let’s Dance” broadcast on NBC. Thus he and his team rehearsed until they developed their own music style which was none other than SWING. The phrase “Let’s Dance” got associated with Benny’s band since the broadcast.