Ukraine – the first Slavic stateUkraine is one of the biggest states in the Eastern Europe, lying on the border between Europe and Asia but being completely in the European side. Ukraine must also be reminded as the cradle of the first eastern Slavic state. Later this parts were occupied and attacked many times. Russia in the time of the empire state and later in the Soviet Union era made the greatest influence on the history of the state. Still today, all the victims of World War II or the fierce famine before it, aren’t forgotten. Country is divided politically in two sides. One looking into the future connections with European Union and the other trying to rely on important natural treasures like oil, gas and coal, arriving from Russia.

Table of Contents
I The vast and beautiful Ukraine
II Much to see and experience
III Inspiring architecture
III.I Similar articles and topics:

The vast and beautiful Ukraine

With just over 600.000 square kilometers of land, Ukraine tends to be a very big country, but is still barely on the top 50 list in the world. It is a bit larger then Spain and a bit smaller then France, but the population of around 45 million, means it is not overcrowded. The largest city is Kyiv, the capital with a bit less than 3 million inhabitants. Kharkov is second largest with around 1.5 million and 3 cities have around 1 million population. Those are Dnepropetrovsk, Donetsk and very important port Odessa.

While on the north Ukraine borders Belarus and Russia, the very important south gets all it’s sun on a long Black Sea coast. Except Odessa, some other important cities are positioned here. One of them is Kherson and other very well known is surely Yalta, where 3 most important presidents met before the end of the Second World War.

Much to see and experience

Ukraine is so great to explore. Big cities with wide boulevards, big squares and old rusty trams, usually from the Soviet era. Nightlife vibrant in some parts and totally missed out in many other places. Modern and big shopping centers in big cities with goods being brought from all over the world with fresh fruits and vegetables on markets, many times being sold for nothing if you’re arriving from developed countries. Still in many places around the country, it is hard to get modern equipment and prices can go up crazy if you’re not careful. 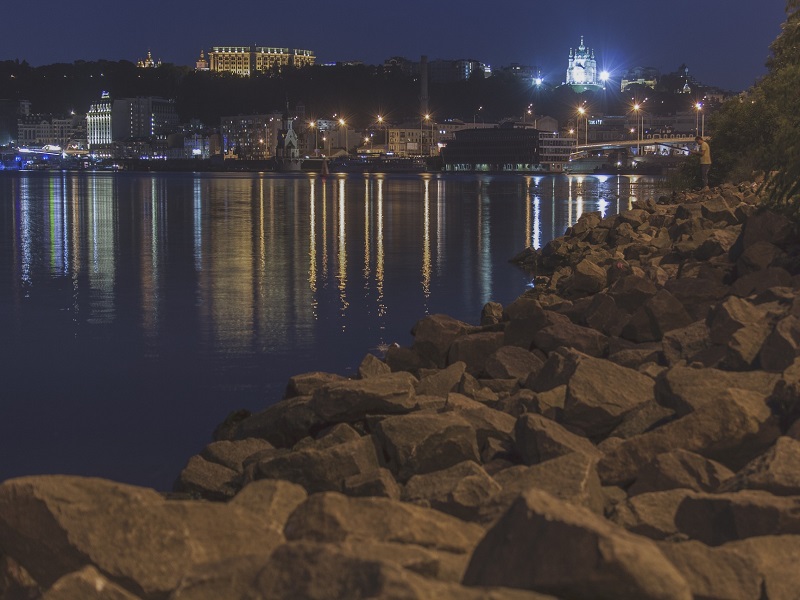 Kiev’s architecture in the distanceWaste areas of plains, forests, great rivers, many lakes, hills but no big mountains. The highest elevation point is at only 2.000 meters and lowest part is around Black sea, where you can enjoy on almost 3.000 kilometers of coast.

Older architecture like some great orthodox churches, palaces and castles is mixed up with modern apartments, villas and shopping center in big cities. Some modernization was being done in transport system because of Ukraine being a host of EURO 2012 Football. Still football stadiums aren’t probably what you will be looking for if you’re visiting the country as a tourist. Visiting big cities is easy but going out of them really needs a good planning. Great landscape is waiting for you in the Carpathian mountains and some fantastic architecture in Sudak castle in Crimean territory. If you’re travelling only to make business, then Odessa and Kyiv should be your destination points.